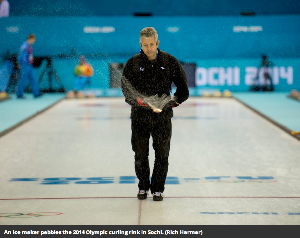 What makes curling ice so different than other ice?  What extra preparation has to be done to the ice?  And how does sweeping really work?

The Smithsonian Magazine has a great article out this month that dives into detail about what goes into making curling ice – and how it is different from, say, ice used for figure skating or hockey.  The key part about the ice is:

If curling ice was flat, the stone would move barely halfway across the “sheet,” or curling lane. And that’s assuming the curler is hurling it as hard as possible. Friction would halt the rock within seconds. So, to make the ice more amenable to the sport, devoted ice makers employ a technique called “pebbling.” More or less what it sounds like, pebbling involves freezing small droplets of water across the playing surface between each match.

Curling stones weigh 44 pounds. They are concave, on bottom, which limits the contact they have with the ice. The curling stone’s concave bottom, which limits how much it comes into contact with the ice, and the pebbles reduce friction. Essentially, the pebbles melt a bit when the heavy stone runs across them, creating a micro-layer of water upon which the stone can glide.

The pebbles create the “spin” (or curl, hence the sport’s name) of the stone after it’s released, at least in part; physicists contend that something called “wet friction” also accounts for the curl. Sweepers—those furious ice brushers who’ve become fodder for Olympic memes and GIFS—use a broom to brush the pebbles, thereby changing how the stone spins. Specific techniques melt the pebbles, reducing friction and helping the stone travel even farther and straighter. Naturally, the game changes as the pebbles erode, and sweepers have to constantly compensate.

The article goes on to talk about the efforts made by professional ice-makers (and yes, there are those people) to prepare the ice for events such as the Sochi Olympics.  It’s well worth a read to understand why curling ice is different!

(And if you found that interesting, please sign up to help us bring curling to Keene!)