Are you interested in bringing the sport of curling to Keene, NH, and the greater Monadnock region?  We are planning to have an organizational meeting in early August 2014 to bring together as many of the people who have already expressed interest – and hopefully more – to talk about the next steps we need to take to move forward with our vision and our plans.

We are finalizing a date and location – if you would like to be included please contact us so that we can be sure to let you know! 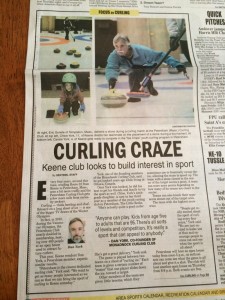 Many thanks to the Keene Sentinel for their great article on the front page of the Sports section in today’s Sunday paper.  It nicely promotes the open house happening today down at Petersham Curling Club and also mentions the work we are looking to do to bring a dedicated curling facility to Keene and the Monadnock region.  The online article strangely didn’t include any photos, but the print version has a few great photos.

If you are visiting this site from the Keene Sentinel’s site or because of the article, THANK YOU!  If you would like to see curling happen in the Keene region, there are three things you can do to help:

1. Visit the Petersham CC Open Houses – The closest place to curl right now is the Petersham Curling Club and to make curling a reality in Keene we need to build a group of people who know how to curl and want to make it happen here.  So please do check out the PCC open houses today from 12-5 and on this Thursday, Feb 20 from 6-9.   If you’d like to do more, please join the PCC and also check out their upcoming “Learn to Curl” sessions.

2. Fill out our interest form – Even if you’ve never tried it and just think it looks interesting, we need to get a sense of how many people are interested in the sport of curling.  We’re also definitely looking for people who would be interested in helping us build the organization in many different ways.

3. Spread the word! – Please help us spread the word that there are people who want to bring the sport of curling to Keene and the greater Monadnock region.  Tell people about the website… follow us on social media (and share/retweet our info)… invite us to come talk to your group (we can explain curling! 🙂 )… just let people know we’re here!

Thank you for visiting – and let’s bring curling to the region! 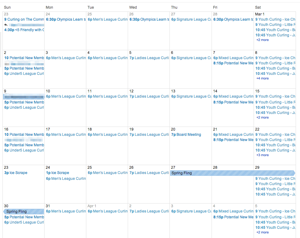 Happy New Year! With the Sochi 2014 Winter Olympics only about a month away, how about we resolve to make 2014 the year we figure out how to bring the sport of curling to Keene and the greater Monadnock region of southwestern NH and surrounding parts of Vermont and MA?

We need your help!  Right now we’d really like you to show your support for bringing curling to the region – and to let us know you are interested!  We’re looking to hold an organizational meeting soon and would like to make sure we invite people who are interested.

Let’s make 2014 the year we bring curling to the Monadnock region!

If so, here are three quick ways you can help us bring curling to Keene and the greater Monadnock region. Our greatest need at the moment is to build a community of people interested in the sport of curling and be able to show that support to others in the region:

1. Connect with us on social media – Help us show that people are interested in curling in the region by:

2. SPREAD THE WORD! Please share those pages and accounts to your own social circles – and please share/retweet/+1 any updates we post.  Tell people about the website. Mention “monadnockcurling.org” to friends. Write up an article for the newspaper or some other printed publication.  Post a notice on a community bulletin board…  help us let people know!

3. Please fill out our form to let us know your interest and experience (and you don’t need ANY experience – just a desire to see curling available in the Keene area).

Together we can bring the sport of curling to the Monadnock region!  We need YOUR help to spread the word!  Thank you!

Greetings!  Are you interested in the sport of curling?  Have you played it before?  Or seen it on TV and thought it looked interesting?

Would you like to be able to play the sport of curling within the Monadnock region?

If so, please join with us and help us bring a dedicated curling facility to the Monadnock region of southwestern New Hampshire and the surrounding regions in Vermont and Massachusetts.